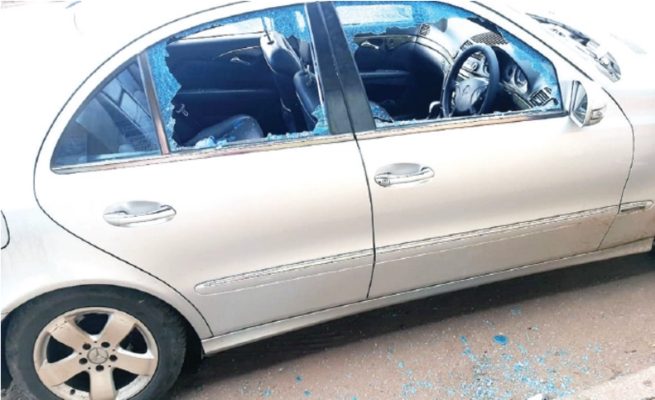 BUSINESS came to a standstill in Harare’s central business district (CBD) after a woman smashed her husband’s car after a row over her cellphone.

Tonderai Masenda’s car was reportedly damaged by his wife after he went through her mobile phone without her permission.

Witnesses, who spoke on condition of anonymity, said the wife was caught smiling into her phone whereupon her husband grabbed it and sped off.

“I just heard noise while I was walking along Harare Street so, because I love stories, I then rushed to where the noise was coming from,” a witness said.

“When I got there, the wife was still there but the husband had left. It is said the lady was over the counter on WhatsApp, smiling and giggling while the husband was standing at the door.

“The husband got jealous and walked towards his wife and grabbed the phone and ran away with it.

“The wife tried to run after the husband but it was already too late because the guy had already left. The lady, in anger, then started smashing the husband’s car.”

Contacted for comment, Masenda denied having his car damaged although this publication is in possession of pictures of the smashed vehicle.

“I don’t know what you are talking about; the car was never smashed,” Masenda said.

His wife’s phone was not available when H-Metro tried to get a comment from her.

News Cynthia Goba - 12 April 2022 0
A HEATED argument over suspected infidelity ended in tragedy after a 26-year-old Harare woman hit her husband with a brick before stabbing her with...

News Muza Mpofu - 12 April 2022 0
THE helicopter that crashed near Chibhero Agricultural College in Mhondoro on Sunday was privately owned and resulted in the death of its pilot, officials...

Cricket coach Saurombe’s death: New details emerge – They killed him and hanged his...

Sports Cynthia Goba - 12 April 2022 0
NEW details have emerged of how Procter Saurombe, a 43-year-old cricket coach was killed mafia style before his body was hanged at the gate...

News Muza Mpofu - 12 April 2022 0
AN unidentified kombi driver and his conductor have been accused of gang raping a 20-year-old woman in Harare. In a statement yesterday, police spokesperson Assistant...

News Muza Mpofu - 12 April 2022 0
A pilot died on the spot after a helicopter crashed in the Mhondoro area on Sunday afternoon, in what has been described as a...