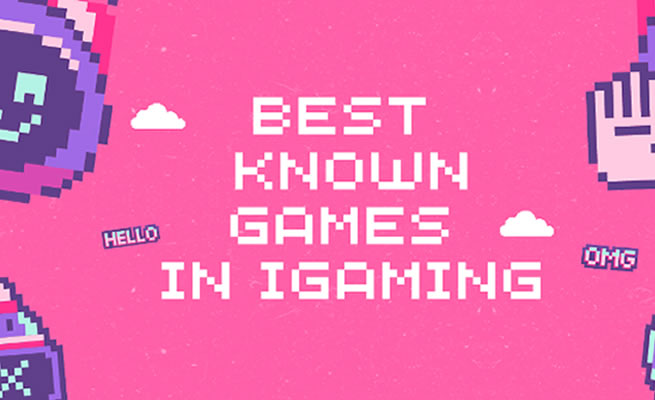 The 1990s saw the birth of iGaming, and its growth continues to increase at an incredible speed to this day. An immense number of online casino games are now available on the web and are played by millions of individuals around the world. Amongst the most popular iGaming games are casino games such as slot machines, table games, and bingo. Thus, the popularity of these games with stunning themes and graphics is particularly due to the great offers they provide to their players. To find out more, let’s take a look at the most successful online casino games in iGaming.

This pastel-themed online game inspired the gaming site Double Bubble bingo to provide reliable gaming products and services in the iGaming market. This gaming website is the best destination for players where they can play double bingo slots and other exciting casino games. Double Bubble slot was designed by the UK-based leading software developer, Gamesys, and has become an iconic game among aficionados. The game was released in 2006, and similar to other virtual slot functions, the game has very simple rules but can boost massive gains through two bonus games and jackpots. The slot takes us back to our childhood with colourful symbols and an appealing interface. Double Bubble is taken from the traditional slot, with classic items including cherries, watermelon, and more. The 5 reel and 20 active payline slot enables those who want to hit winnings through the winning combinations and bonus games. The Wild has evidently the role to substitute all other symbols on the reels except the bonus bubble icon. To unlock the Double Bubble Bonus game, the gamers need to land three of the bonus symbols on reels 1, 3, and 5. The jackpot of up to 20,000 coins can be boosted by hitting the Wild symbols in an active payline.

Although various animal-themed slots are regularly released in the online gambling market, Fluffy Favourites is constantly appreciated by slot enthusiasts. Eyecon’s game is about the various soft animal toys and their environments. The background is based on the game theme where you see a beautiful rainbow and a big circus tent. Despite the simple graphics, Fluffy Favourites was inspired by the kid’s TV show in the 1970s. The game features 5 reels and 25 paylines with cute animals as symbols that can reward players with huge prizes. The gentle pink elephant acts as a wild and a scatter, so landing three or more of this item will unlock the bonus games. One of them is the Toybox Pick Bonus, which will transport them into an exciting world where they are asked to pick a box with hidden prizes. The luckiest players trigger a prize of up to 5000 coins. Those who want to put some spice into the gameplay should activate the gamble feature by pressing the “Gamble” button. If the chance is on their side, they can get 3,200,000 coins.

The slot game Monopoly Megaways is the result of the cooperation between Big Time Gaming and the board game designer, Hasbro Gaming. The two sides are ambitious enough and release the profitable slot called Monopoly Megaways. As its title suggests, the game is inspired by the Monopoly board game to make the gaming experience more exciting and interesting. Although Monopoly Megaways is created with a simple reel, it promises up to 117,649 ways to win. In fact, Megaways mechanic means a random reel modifier that changes the number of icons appearing on each reel. Despite the lack of bonus features, the players can gather great prizes from a single spin through the icon Monopoly that moves down the board. Try to open the Free Spins bonus as it is the most profitable feature that can trigger 14,700 times the bet amount in a single spin.

We usually face confusion when it comes to online gaming games. With the amazing booming of the iGaming industry, software development companies seduce more and more players by releasing a large selection of games. With tight competition in the online gaming market, a wide array of games paired with innovations entertain people. From the bingo games and slots to the table games and board games, everyone will certainly find the best title. Whether you are a newcomer or a professional gambler, try to entertain with the best-known games like Fluffy Favourites, Monopoly Megaways, and Double Bubble.