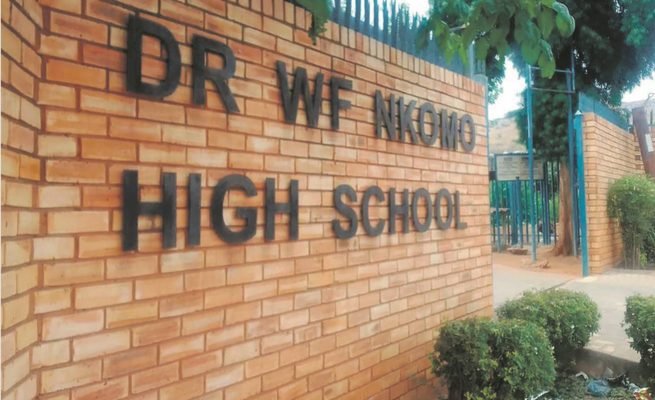 WHAT was supposed to be a normal day of learning at Dr WF Nkomo High School in Atteridgeville, Tshwane soon turned into chaos.

One of the teachers has injuries to show for it.

Her ordeal started on Friday, 14 October when pupils told her that three pupils were performing rituals while others were watching.

“When I got there, I found them wearing sangoma clothes.

“One was lying on the floor and the other two were trying to help her,” she said.

The teacher said one of their school rules is that a pupil should be taken to the staff room when they have a spiritual attack and not be helped by other pupils.

“It was already chaotic, so “I called the principal to witness and intervene and we took the pupil who was lying on the floor to a classroom.

“I stood guard at the door, making sure no one entered until the pupil’s parents were called,” she said.

She said while she was sitting next to the door, a pupil came with muthi.

“The pupil was with a group of other pupils and they started fighting me, saying they want to help.

“I told them that they know it is not allowed and we should wait for the parents,” she said.

But the pupil holding the muthi called a group of izangoma.

“I went to the security and told them not to open for anyone. The pupil came to me and sang her sangoma songs. , calling her ancestors. She said I must apologise to her and when I asked her why, she threw chairs at me. Remember, as a teacher, if I fight back, I will be wrong. She hurt me on my leg and hand,” she said.

The teacher said a group of izangoma forcibly entered the school and assaulted her.

The teacher, who is also a pastor, said she doesn’t feel safe at the school anymore.

She said they accused her of disrupting an ancestorial procedure and mishandling the situation by separating the pupils.

She said one of them hit her with a wooden chalkboard duster while another bit her on the hand and chest.

“I ran away and as I ran to my car, the izangoma banged on my car and shouted at me. I asked them to sit down and talk because I didn’t understand why they were fighting.

“I asked them to go into a classroom so we can talk. They told me to apologise and I asked what I was supposed to apologise for because I did nothing wrong. They also threw things at me. I ran to the principal’s office,” she said.

The teacher said the izangoma said they want her to apologise so that the pupil can be released from the attack.

“They were about six or seven izangoma. Some were even taking videos of me, while others were holding me. One of them bit me on my stomach and chest and I kicked her,” she said.

“I think this was an attack because I am a pastor. One of the pupils once said they want to kill me because they can’t do their things in the school because of me.

I think this is a spiritual thing because why are they fighting me when I didn’t do anything,” she said.

She said she is not well after what happened.

“Emotionally I am not right because this was embarrassing. I didn’t do anything wrong. Physically, they injured my leg and hand,” she said.

She said she doesn’t feel safe anymore at the school.

She said she usually prays for the pupils at the school.

Atteridgeville police communication officer, Mapula Rikhotso, said a common assault case was opened but no one was arrested.

The Department of Education hadn’t responded at the time of going to print.

The matter is still being investigated.