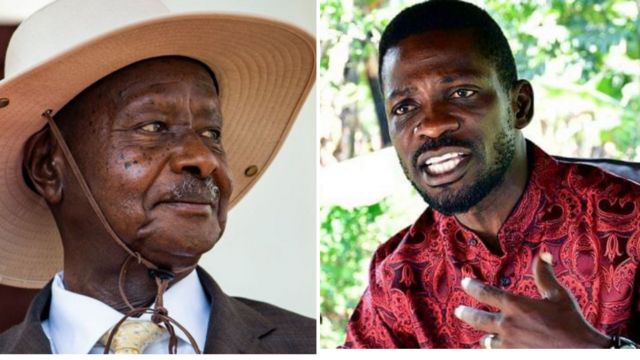 “What has been announced here is an attempt to undermine the will of the people in Uganda,” he said.

“The legal framework in Uganda gives us a number of opportunities and options to which we can contest this unfair process and going through the Supreme Court is one of the options,” Katana added.

“We ask the people of Uganda to stand firm and work with us to explore all the options … to make sure that we stop this coup.”

The results were announced as Bobi Wine was under heavy guard at his home on the outskirts of the capital, Kampala, with his party saying he was under “effective house arrest” and the government saying it was merely providing him with security.

They also followed one of the bloodiest campaigns in years, with harassment and detentions of opposition figures, attacks on the media and the deaths of at least 54 people in protests in November, on one of the multiple occasions when Bobi Wine was arrested.

Security personnel and police were out in force patrolling Kampala, on Saturday. The government ordered the internet shut down the day before the election, and the blackout was still in place.

Bobi Wine, a singer-turned-lawmaker whose real name is Robert Kyagulanyi, said on Friday he had video proof of voting fraud and would share the videos as soon as internet connections were restored. He accused Museveni of fabricating the results and called the poll “the most fraudulent election in the history of Uganda”.

Byabakama said under Ugandan law, the burden of proof rested with Bobi Wine. The commission has deflected questions about how countrywide voting results were transmitted during the internet blackout by saying “we designed our own system.” It could not explain how it worked.

“The entire process has been conducted in [the] dark and it lacks transparency,” Katana, head agent of Bobi Wine’s National Unity Platform, told Al Jazeera from the tally centre in Kampala.

“From the beginning, we were assured by the electoral commission that each candidate or their agents will receive copies of the results from the districts before they are transmitted to the national tally centre, so we are able to verify when they are reading here = and that was not done.”

‘For his own safety’

Museveni, 76, campaigned for a sixth tern term arguing his long experience in office makes him a good leader while promising to keep delivering stability and progress.

Bobi Wine, 38, galvanised young Ugandans with his calls for political change and pledged to end what he calls dictatorship and widespread corruption.

He told Al Jazeera the authorities were refusing to allow him to leave his residence.

On Saturday, security forces had sealed off a wide perimeter around Bobi Wine’s sprawling compound on Saturday and told international journalists they were not permitted to enter, according to witnesses.

“His movements are restricted; he is not allowed to leave his home and visitors are not allowed to enter, which in effect indicates that he is under detention, house arrest,” Katana said. “[It] also shows that part of the scheme to rig and undermine the democratic process is to take away the leaders, keep them away, intimidate the citizens, switch off the internet, censor the media – which they have done effectively [and] is why no local station can go and interview Bobi Wine.”

The army’s deputy spokesman, Deo Akiiki, told Reuters news agency security officers at Bobi Wine’s house were assessing threats he could face by going out: “So they might be preventing him in the interest of his own safety.”

Monitoring of the vote was further complicated by the arrests of independent monitors and the denial of accreditation to so many members of the United States observer mission that Washington called it off. Another major observer, the European Union, said its offer to deploy electoral experts “was not taken up.”

The head of the African Union observer team, Samuel Azuu Fonkam, told reporters he could not say whether the election had been free and fair, noting the “limited” AU mission which largely focused on the capital, Kampala. Asked about Wine’s allegations of rigging, he said he could not “speak about things we did not see or observe.”

The East African Community observer team in its preliminary statement noted issues including “disproportionate use of force in some instances” by security forces, the internet shutdown, some late-opening polling stations and isolated cases of failure in biometric kits to verify voters. But it called the vote largely peaceful and said it “demonstrated the level of maturity expected of a democracy.”