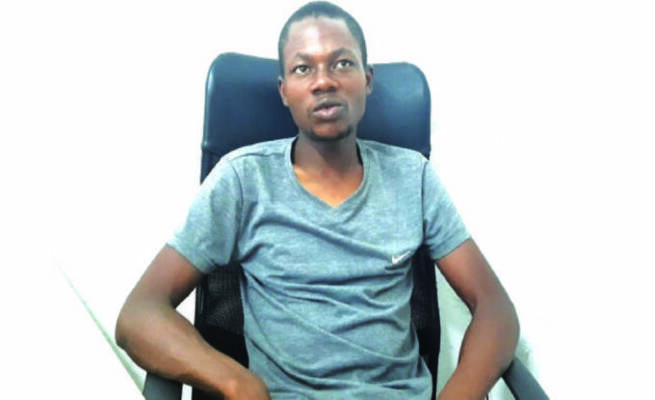 This used to be Mr Onias Providence Mawodza and his friends’ slogan.

That was until three years ago when Mr Mawodza stopped eating and drinking anything other than spaghetti and mahewu.

He contracted a rare disease which is often found in people over the age of 50 — oesophagus stricture.

However, he was only 27 when he was diagnosed with the disease.

Indeed, his is an extremely rare case.

For the past two years, he has been having trouble ingesting anything, be it food or drink.

For two years, he lived only on spaghetti and mahewu until he could not swallow those.

He stopped eating and drinking completely in May this year.

Not because he is fasting or dieting, but because not even water or spit can go down his oesophagus.

The oesophagus is a relatively straight muscular tube through which food passes from the pharynx to the stomach. It contracts or expand to allow the passage of food.

When Mr Mawodza swallows something, he either chokes or vomits the food as it will be stuck in the oesophagus and will not go down to the stomach.

Research showed that the human body can only survive without food and water for eight to 21 days.

Doctors at Parirenyatwa Group of Hospitals in Harare had to drill a hole and insert a plastic tube which goes straight into his stomach.

To survive, he pumps liquefied food into the tube.

When The Manica Post visited Mr Mawodza at his Chikanga home in Mutare recently, he was having liquefied potatoes and milk which he was pumping straight into his stomach before adding water.

A food blender does the chewing for him as it crashes all the food that ends up in his body.

Mr Mawodza revealed that he does not enjoy it as much as he enjoyed his food while consuming it through his mouth.

“When I pump the food into my stomach, I just feel that I am full, but I do not enjoy it. I am doing it to survive because one cannot live without food and water. I know that I am full when I feel like vomiting, the same with water. When I am full, the contents that I would have pumped into my body fill my oesophagus from the stomach,” he said.

Mr Mawodza does not swallow even his spit as it also chokes him.

Narrating his journey, Mr Mawodza said the diagnosis was a shock of his life as he never imagined surviving without ingesting anything using his mouth.

“I first started choking while eating because the food would not go past my oesophagus in 2020, so I went to Victoria Chitepo Provincial Hospital where I was given some throat infection medication. I was told that I would be fine in a few days. However, my condition did not change, so I turned to faith healers,” he said.

Mr Mawodza said for the past two years, he spent most of his money consulting prophets and traditional healers who made him believe that he would recover.

“I have been to different prophets across the country and I have wasted a lot of money with the belief that I would be healed, but my condition actually worsened. They would tell me that evil spirits from my family were causing my throat to close, but they never gave me any solutions,” he said.

Mr Mawodza finally went back to the hospital where he was referred to Karanda Mission Hospital in Mashonaland Central and then Parirenyatwa Group of Hospitals.

It is at Parirenyatwa Group of Hospitals where he was diagnosed of an oesophagus stricture.

An endoscope was performed and it was concluded that he had a 13cm long stricture and therefore needed oesophageal dilation.

An oesophagus is normally 13cm long, which meant all of his was blocked. “The first endoscopy which they performed worked well and I was able to swallow liquid foods like mahewu and drinks. However, this only lasted for a few weeks and when I went back, they said I was in a state of emergency as I had lost eight kilogrammes of my weight,” he said.

Strictures cause malnutrition and dehydration, conditions which Mr Mawodza struggles with on a daily basis.

Since the day he started having challenges with swallowing food, Mr Mawodza has lost more than 20kgs.

Doctors tried to perform another surgery on his throat, but it failed as his throat would not budge and allow for an endoscopy to pass through.

Instead, they performed a surgical operation on his stomach so that he at least has a way to consume food while doctors find other means to open his throat.

“The doctors tried to perform another endoscopy down my throat, but my throat would not budge as it refused to allow the procedure to be performed. Although this failed, I was glad that I could now put food into my body,” he said.

“He has lost 20kgs since then, but we have been working on it since we are now blending his food. His specialised diet consists of crushed sadza, rice, spaghetti and potatoes with milk or eggs, but we are having trouble buying milk and eggs on a daily basis. I appeal to anyone who might help us to extend a helping hand, even in the form of spiritual help because we no longer know what to do,” said Ms Zengeni.

She said the family is facing financial challenges due to his condition as he was the family’s breadwinner.

In an interview, Mutare physician, Dr Tendai Zuze said an oesophageal stricture is an abnormal tightening of the oesophagus, adding that such strictures can limit or block food and liquid that is travelling from the throat to the stomach. Swallowing is difficult and one feels like food is stuck in their throat.

“Acid reflux is the most common causes of strictures, but cancer and other issues can also cause them. A dilation procedure can widen the oesophagus and reduce symptoms and in severe cases, even drinking liquid can be difficult,” he said.

Dr Zuze said oesophageal strictures are not common and that they usually affect people older than 50 years, with rare cases of babies being born with the condition.

Mr Mawodza is due for an endoscopy and dilation procedure on his oesophagus at a private surgery in Mutare and is in need of US$530. The operation costs US$1 200. He is appealing to anyone who might assist him in cash or kind to help.

“I am appealing to the people of Zimbabwe to help me raise this money. I have paid up at least US$530 in instalments and appeal to you to help me raise the balance so that I may be assisted and be able to ingest food using my mouth. As it is, my life is in danger as each day passes,” he said.