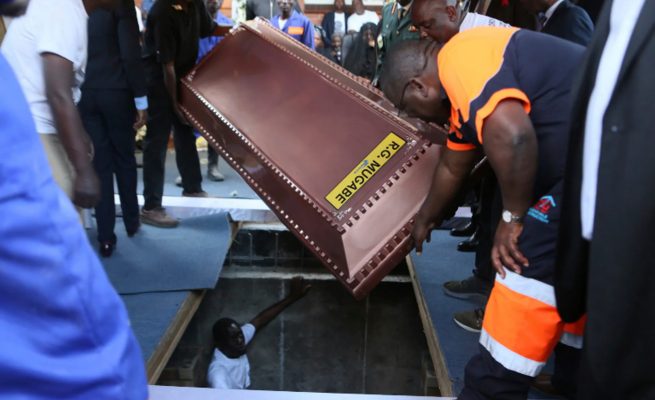 My successor, who is now infamously known as the Page 2 girl, will leave no stone unturned in desperation for national attention.

She is now even being credited for bringing about weddings in Kanyemba because of her teachings!! kkkkk.

The world has truly gone mad.

Next we will be told that it is because of her efforts countrywide that we are breathing at this rate!

Only this week Joji was at pains to tell us that she was elected to try and give the impression that she is popular.

I am sure he was told off just like I did to him at that rally and was ordered to “set the record straight” whatever that is!

In all my time never have I gone to such lengths to get attention.

Dr Amai 11 has even gone to the extent of banning media houses when she goes to open public institutions, preferring to move along with her band of wailers…… oops sorry praise singers.

Mother of the Nation my foot!

He is now wearing those hideous shades in a sorry attempt to walk in Baba’s footsteps. Unopenga!!!

You will never be as wise or as cool as Baba no matter how many or what type of sunglasses you wear.

His advisors should be fired for letting him go public in those shades, including Ndabaningi who even went on to shockingly say that “he was looking cool” when he went to Abidjan in Ivory Coast kkkkkkkk.

With people like that nurse as part of Ngwena’s entourage, who needs enemies?

We know Ndabaningi you need to sing for your supper, but such outright lies are taking it too far!

The Zanu PF congress last week showed that the party is now poorer without Gushungo.

In fact, it has completely lost direction. It has turned from a vibrant party gathering under Baba to a circus.

One should just look at Kembo’s remarks at the congress to see what I mean.

To see a grown man pledge loyalty at the congress by admitting that he was a naughty boy because of his failure to leave married women alone was pathetic as it was nauseating.

This is why Baba never appointed him to be vice president despite his pleas to be appointed to the post.

Can you imagine Baba having such a clown in the presidium!!! Hehehede Never!!! Cry the beloved party.

Poor Ngwena, he is trying to make us believe that he is bringing mega deals to Zimbabwe with state media screaming that he has struck a US$105 million deal kkkkkkkk.

They must be confusing those worthless RTGS for US dollars at Munhumutapa Building.

The imaginary figures of investment in the country only benefit the country on the printed papers at Mortar Glass House or on the cameras at Pockets Hill.

As for those at Dead BC, we know only too well that, like the rest of us, they have not felt the positive impacts of these eye watering investments that they have been singing about in their daily bulletins if their recent plea to see Ngwena because of biting poverty and poor working conditions are anything to g by kkkkkkkkk.

Meanwhile, we have been told that reality has knocked out perception, as Zimbabwe bounces back through Ngwena’s comprehensive reforms.

“There is a gap between perception and reality, but through our policy of engagement and re-engagement, that gap has been narrowed because people are able to come and see for themselves that we are friend to all. We are a stable country,” Ngwena told investors in Abidjan, we are told.

Stable with inflation at 268%, one of the highest inflation rates in the world and rated at the bottom of the Trade Openness Index by the United Nations Conference on Trade and Development?!

So stable that nurses and other health professionals are leaving the country in droves due to the poor working conditions?

Does he think he was talking to kids? These investors must have spluttered in their tea.

Ngwena is surely responsible for some cracked ribs due to laughter in Ivory Coast after being told such fibs.

In fact the gap between Ngwena’s remarks to the investors and what is on the ground is as wide as the gap between the quality leadership of baba and the lack of it by the Lacoste kingpin! Baba must surely be turning in his grave!

The delusion at Munhumutapa Building is now at hazardous levels.

They have come with a master plan to increase investment and that is through offering investors citizenship!!.

This is what they call Second Repubric kkkkkkkkk.

Someone tell Monica that investors want consistent and sound policies for them to put their hard earned money in the country, not citizenship.

The Legal Status Of FX Trading In Africa