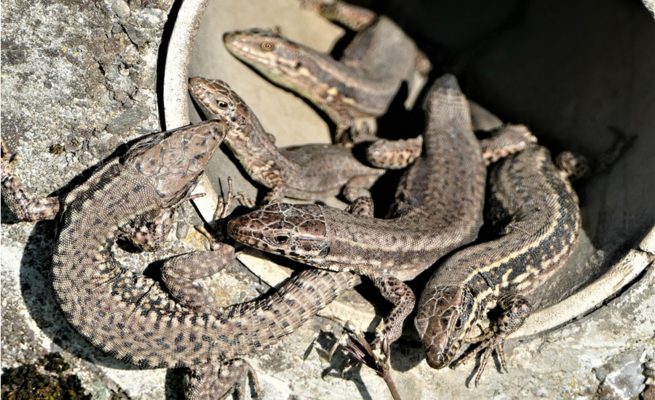 For the past few months, snakes and lizards have been mysteriously appearing in a Nyanga family’s pots whenever they prepare their meals, The Weekender has learnt.

Some of the cold-bloodied reptiles have also been found in a baby’s napkins.

All this is happening in Nyamahumba Village, Nyanga.

This situation has escalated to an unprecedented level since February when the family brought the matter before Acting Chief Saunyama’s court.

Matthew Nyamahumba, one of the family members, says the reptiles are multiplying on a daily basis.

He said his family is now living in fear as the cold-bloodied reptiles are finding their way into the family members’ bedrooms and the kitchen.

It was revealed during a session at Acting Chief Saunyama’s court that money spinning charms are allegedly behind the family’s misfortunes.

The family’s patriach, Sekuru Johannes Nyamahumba, stands accused of acquiring the charms some time ago.

He, however, is denying the allegations.

During their initial court appearance in February, the Nyamahumbas were ordered to consult four different spiritual healers in Makoni, Zimunya, Marange and Mutasa to unravel the truth behind their suffering.

Matthew said his brother, Sekuru Johannes Nyamahumba, is letting the family down.

“All the traditional healers we have consulted have told us in Mukoma Johannes’ presence that he is the culprit behind all this. He is supposed to pay what he owes to the person who sold him the charms.

“He even confessed and promised to pay the spiritual healer with some of his cattle. However, when we went back home, he moved his cattle to an unknown place behind our backs,” said Matthew.

“That is when the situation worsened. The reptiles started multiplying. Our homestead is now infested with the reptiles and can be seen everywhere, including in pots on the stove as we prepare food.

“They are also in our bedrooms and in my baby’s napkins. This is terrifying. We often have to throw away the food that we will be preparing because of the reptiles,” said Matthew.

He said the same mysterious occurrences are also taking place at his other sibling, Lovemore Nyamahumba’s homestead.

“We are being forced to share our homes with these reptiles because we have nowhere else to go. We are suffering because of our brother, Johannes’ greediness.

“He acquired lucky charms and failed to pay the supplier. I have lost my child because of this. My brother, Lovemore, also lost a child recently, but Johannes keeps dilly-dallying on paying the spiritual healer. We fear that the whole family will be wiped out,” said Matthew.

Acting Chief Saunyama said despite confessing to causing the mishaps in his family and being fined by the traditional court for defiling the area, Sekuru Nyamahumba is yet to pay the fine and the spiritual healer he owes.

“He moved his cattle to an unknown place, a sign that he does not want to pay anything. We will wait until he makes up his mind and settles the debt so that his family can be released from this curse,” said Acting Chief Saunyama.

Sekuru Nyamahumba was in default when the family appeared before the traditional court last week on Friday.

However, when Sekuru Nyamahumba previously appeared before the same court, he vehemently denied causing the mishaps in the family.

He distanced himself from causing any death within the family.

“Matthew’s son was electrocuted after climbing on an electricity pole. How can this be wizardry? There was no electricity when he climbed the pole but supply was restored before he had descended the pole. They now accuse me of causing his death,” argued Sekuru Nyamahumba back then.

“I am innocent and want my good reputation in the society to be restored. I am prepared to appear before any traditional healer or spiritualist to clear my name which is being dragged in the mud,” he said.

Sekuru Nyamahumba also denied ever seeing reptiles at his brothers’ homesteads, and claimed that if indeed this was true, then Matthew is answerable as he is allegedly in possession of some goblins.