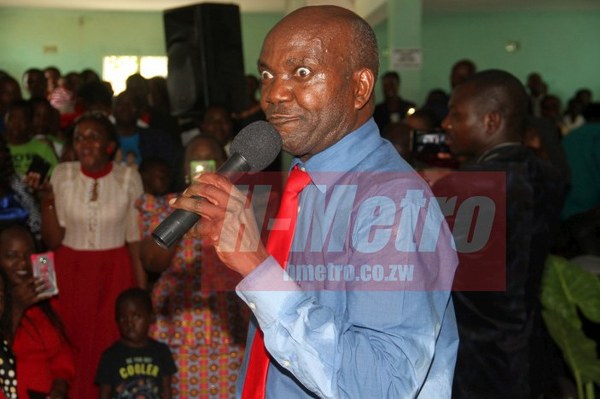 Apostle Kapandura used all sorts of words from what he termed ‘vocabulary renyaudzosingwi’ to attack prost_itutes and false prophets saying they are being used by the devil to destroy families.

Due to his shameless description of private parts in his message, Apostle Kapandura spent the better part of his sermon begging his audience to lift their heads and fix their eyes on him as they felt out of place.

Overseer Kapandura along with her mother nodded in support of the gospel shared by Apostle Kapandura throughout the sermon when most of the women looked uncomfortable with his explicit language.

“I want you to remember that I am a freedom fighter and I have shelved the gun and got hold of the Holy Bible to destroy the works of the devil,” said Apostle Kapandura in his sermon.

“Those who are lazy to pray to God are after these false prophets and money meant to raise their families is being taken daily by false prophets.

“Men who are abusing their wives either physically or se_xually are exposing them to false prophets who are now in the habit of touching their private parts in unholy prayers.

He challenged youth to remain faithful and prayerful if they are to achieve what has been bestowed in them by God bemoaning girls who are losing their v_rginity in exchange for food.

“Girls must know that our parents can be rich by receiving lobola if you do not allow these lustful men vanemeso anenge emapere ekuparadza vanana.

He turned his message to attack prostitutes describing them as enemies of life who are after destroying families and taking people to graves.

“Prostitutes must turn to God. There is nothing to boast about being a pros_titute because they are catalysts of death and all who look for them are heading to graves,” said Apostle Kapandura.

“Away with pros_titutes and those men and women who are engaging in adultery because they are after their own good forgetting about their children.

“Har_lots used to hook men for se*x during the night but these days their eyes are darkened to hook men during the day stealing money for school fees, buying vehicles, building homes and for our daily meals.

“These days too we are experiencing male pros*titutes who are starting ministries in the name of prophets to collect money from desperate people and end up raping them.

“The nation must be very careful with These self-ordained pastors and prophets because some of them are being trained for few months by those after money,” said Apostle Kapandura.

Apostle Kapandura, who has degrees in theology, administration and philosophy, is set to take the gospel to Mozambique this week after a successful mission in South Africa last week.

Asked if he has faced any challenge in the ministry over his explicit language in preaching or any other challenge, Apostle Kapandura said a soldier does not face challenges since he is trained to undergo difficulties and come out a winner.