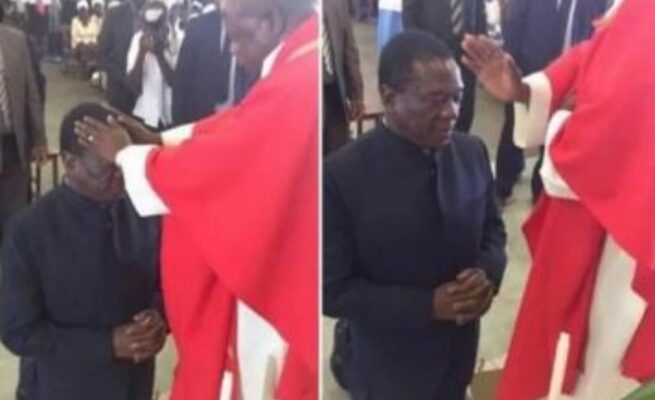 PRESIDENT Mnangagwa yesterday joined a national thanksgiving prayer and implored churches to embrace Government’s economic development agenda, saying synergies between them and the State must flourish for the country to achieve Vision 2030.

The President made the remarks while addressing congregants during the fourth edition of the annual National Thanksgiving and Dedication Service at the Zimbabwe International Trade Fair (ZITF) Grounds.

He urged churches and other stakeholders to complement Government efforts in promoting economic growth and development in pursuance of the national vision to transform the economy into an upper middle-income status by 2030.

The President expressed confidence that if churches and Government complemented each other, Vision 2030 would be achieved, including conquering Covid-19, which has so far claimed more than 1,7 million lives and infected more than 80 million people globally.

President Mnangagwa urged the nation to double its prayers so that Zimbabwe is spared the ravages of the deadly pandemic.

Zimbabweans, he said, should continue complying with World Health Organisation (WHO) guidelines as outlined by the Government to curb the spread of Covid-19.

The annual event has, since inception in December 2017, hosted thousands of inter-denominational congregants from across the country. It is held every last Sunday of the year.

President Mnangagwa said the country’s economic growth hinged on collaboration between the Government and churches, among other players.

“On our part as Government, we have chosen the spiritually correct path of working with the church in pursuit of our vision. Thus, as Zimbabwe, we shall serve the Lord sincerely and faithfully,” he said.

“Going forward, I urge churches to emerge in 2021 and beyond as proponents, guarantors and implementers of our national development agenda. To this end, let me reiterate that the synergies between the church and the State must flourish and become more evident to our people.”

“This can only be achieved if the church understands, appreciates, embraces and blesses and makes energetic efforts to etch Vision 2030 in the hearts and minds of our people.”

The President noted that under the distressing Covid-19 new normal, his administration has, through God’s wisdom and guidance, managed to craft and spearhead result driven national development agenda.

“In this regard, the Transitional Stabilisation Programme (TSP) has recorded greater success in ushering in macro-economic fundamentals such as the stabilisation of the economy, enabling further important developments across the sectors of the economy,” he said.

“I thus call upon the church and citizenry at large to ride on the TSP momentum as we set to implement our 2021-2025 National Development Strategy 1 (NDS1). On this standing our trust in the Lord remain unfettered, for he has plans to prosper us a people as we deploy our qualities of hard and honest work.”

President Mnangagwa highlighted some of the developmental projects undertaken by the Second Republic. He said under the Devolution policy, Government has transformed the social development aspect across provinces through the construction of schools and clinics among other key social amenities

The President said positive progress through road rehabilitation initiatives and dam construction is visible and tangible. He lauded churches for complementing Government efforts in the fight against Covid-19 through providing counselling and psychosocial support services including an array of social safety nets to communities.

President Mnangagwa extensively quoted from the scriptures as he spread a message of love, hard work and nation-building.

“We must therefore find inspiration from Deuteronomy 8 verse 18 which says, ‘But thou shalt remember the Lord thy God: for it is he that giveth thee power to get wealth, that he may establish his covenant which he swore unto thy fathers, as it is this day,” he said.

“As people of faith, we must rally ourselves to work hard in building a Zimbabwe that we all want. There are no more significant or less significant people. We are all citizens of this country, equal and duty bound.”

The President said this year’s theme of the National Thanksgiving and Dedication Service “Celebrating the Nation’s Progress towards Vision 2030” is most appropriate and inspiring.

“In this regard, I take note of the Lord’s counsel in Proverbs 16 verse 3 which says, ‘Commit to the Lord in whatever you do and your plans will succeed.’ It is this divine instruction that guide us all, my Government and stakeholders alike, to lead the nation to accomplish our national vision leaving no one and no place behind,” he said.

“We commit ourselves as Government to the Word of God, which regards the vision as a law to be kept and further inform us that keeping the vision will lead to progress. Let us thank God for his help in our various initiatives for unprecedented nationwide winter wheat and maize harvest, and equally we thank the Lord for the rains and continue to pray that the good rainfall season will be sustained.”

The President said the church has the body of Christ has an important role in implementing Government programmes set to improve the living standards of Zimbabweans and further propelling the establishment of vibrant rural industry systems.

He said there was also need to find a lasting solution to addressing unconstitutional insurgencies both internally and externally driven.

“Our progress as a nation also depends on peace in our nation, and in other countries surrounding us. We thank God for the peace that continues to prevail in Zimbabwe,” said President Mnangagwa.

“Let us pray that God will give us wisdom as leaders of Sadc and African Union to seek lasting solution to address unconstitutional insurgencies both internally and externally driven. Africa remains peaceful continent, at peace with itself and seeking mutual beneficial relations,” he said. The President thanked the organisers of the church service, Faith for the Nation Campaign — an inter-denominational grouping of local churches, saying the event created an opportunity for the nation to come together for thanksgiving, renewed and lasting blessings.

It is a platform where believers meet the country’s leadership to intercede for the nation.

The leader of the Zion Christian Church (ZCC) Bishop Nehemiah Mutendi commended the Government under the Second Republic for stabilising the economy.

He also noted that the economic reforms are beginning to bear fruit. Bishop Mutendi urged Zimbabweans to remain focused and hopeful in the wake of illegal sanctions imposed by West.

Apostle Andrew Wutawunashe, the founder of the Family of God Church (FOG) and chairman of Faith for the Nation Campaign, urged churches to rally behind President Mnangagwa in his call for peace, unity and love among Zimbabweans.