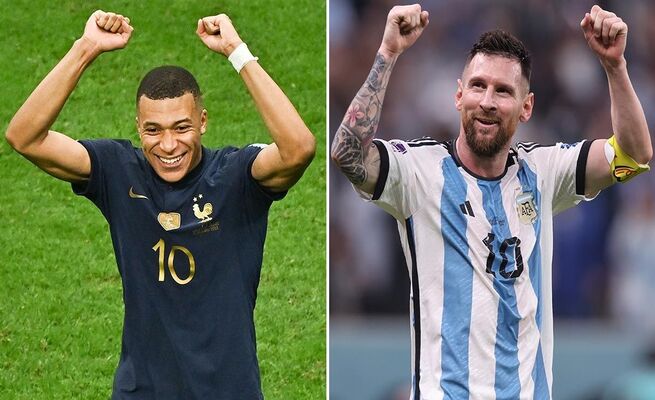 Messi, 35, led Argentina to their third World Cup title, scoring twice in the final as they beat France in a dramatic penalty shootout.

He netted seven goals in seven games and became the first player to score in each round of the same World Cup since the last-16 round was introduced in 1986.

He is also the first player to win the Golden Ball award twice since it was introduced in 1982 after also winning the honour in 2014.

Mbappe was top scorer with eight goals, including a hat-trick in the final.

It was the first treble in a World Cup final since Sir Geoff Hurst’s in 1966, when England beat West Germany.

Mbappe, 23, scored twice in normal time and once in extra time as 2018 champions France lost the showpiece at Lusail Stadium.

The Paris St-Germain forward also created history when he became the first player to score four goals in a World Cup finals, having also netted in France’s 2018 victory over Croatia.

Mbappe, who took his total tally of World Cup goals to 12, became the youngest player to reach double figures in the competition.

He joined Brazil’s Vava and Pele, West Germany’s Paul Breitner and France’s Zinedine Zidane as the only players to score in multiple World Cup finals.

Messi, who captained Argentina in what is expected to be his last tournament, netted his 97th and 98th goals for his country in the final.

He has scored 13 goals in the competition and has contributed to 21 total goals in World Cup history – more than any other player.

Mbappe was named the Silver Ball winner as the second best player in the tournament and Croatia’s Luka Modric picked up the Bronze Ball after guiding his country to third place.

He played every minute of the tournament and saved Frenchman Kingsley Coman’s spot-kick in the final shootout.

Argentina and Benfica midfielder Enzo Fernandez, 21, was named Young Player of the Tournament after a string of impressive performances in Qatar.

He started the final win over France and scored his only World Cup goal in the 2-0 victory over Mexico in the group stage.

Elsewhere, England won the FIFA Fair Play Trophy for the fewest bookings throughout the tournament.