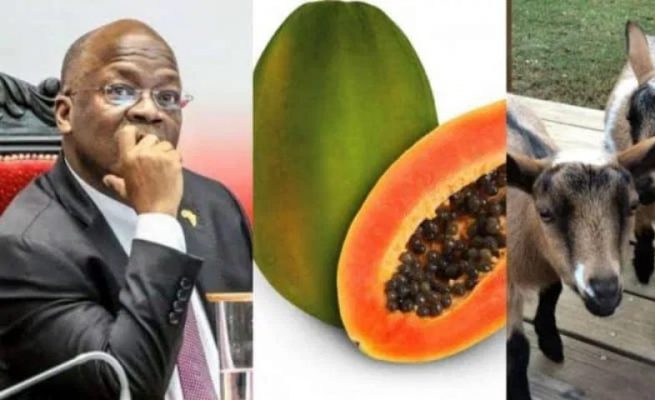 Tanzania’s President John Magufuli has dismissed imported coronavirus testing kits as faulty, saying they returned positive results on samples taken from a goat and a pawpaw.

Magufuli made the remarks during an event in Chato in north western Tanzania on Sunday. He said there were “technical errors” with the tests.

The president, whose government has already drawn criticism for being secretive about the coronavirus outbreak and has previously asked Tanzanians to pray the coronavirus away, said he had instructed Tanzanian security forces to check the quality of the kits.

They had randomly obtained several non-human samples, including from a pawpaw, a goat and a sheep, but had assigned them human names and ages.

These samples were then submitted to Tanzania’s laboratory to test for the coronavirus, with the lab technicians left deliberately unaware of their origins.

Samples from the pawpaw and the goat tested positive for COVID-19, the president said, adding this meant it was likely that some people were being tested positive when, in fact, they were not infected by the coronavirus.

“There is something happening. I said before we should not accept that every aid is meant to be good for this nation,” Magufuli said, adding the kits should be investigated.

On Saturday, Magufuli announced that he had placed an order for a herbal treatment for the coronavirus touted by the president of Madagascar.

“I have already written to Madagascar’s president and we will soon dispatch a plane to fetch the medicine so that Tanzania can also benefit from it,” he said.

The herbal remedy, called “Covid Organics” and prepared by the Malagasy Institute for Applied Research, is made out of Artemisia, a plant cultivated on the Indian Ocean island of Madagascar.

Despite a lack of scientific evidence, President Andry Rajoelina of Madagascar claimed that the remedy has already cured some Madagascans of COVID-19. Children returning to school have been required to take it.