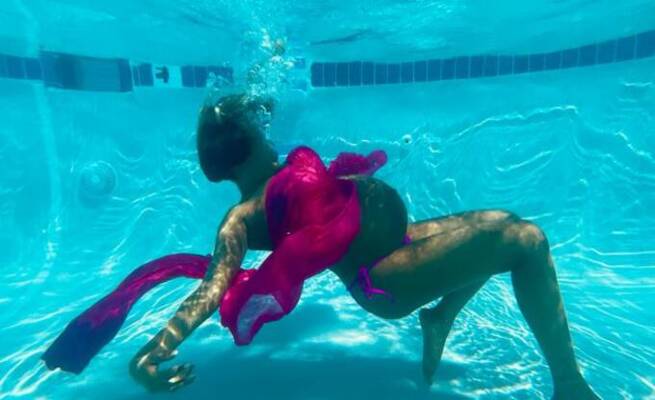 US-BASED socialite, Rumbidzai “Amai Koko” Ashley, is pre_gnant and has flaunted her baby bump under water.

She described it as the “mermaid photoshoot”.

The entrepreneur, who is into cosmetics, believes being a mother is something special.

She refused to name the father of the unborn baby, claiming haters would take advantage.

In an exclusive interview with H-Metro, Amai Koko confirmed that being a mother takes a lot of responsibility, and it should be appreciated.

“It’s a mermaid photoshoot,” she said. “I don’t believe I have seen any Zimbabwean pre_gnant woman who had an underwater maternity photoshoot.

“More focused on the creativity of the underwater mermaid concept, and beauty of a mother.

“I am not sure if other men can let the mother of their child do that,” she said.

Amai Koko said motherhood was a gift from God.

“Motherhood is a miraculous gift from God.

“This time, in my journey, I wanted to convey the beauty of a woman’s body under water, through a graceful video, embracing my new curves in my maternity photoshoot.

“I love pre_gnancy, the blessing of life, and I want to share it with other women,” added Mai Koko.

Asked to reveal when she was likely to give birth, she said:

“If I say much, varoyi will be clocking but the baby will be here soon.

“I just don’t want people blowing up my phone asking a series of questions.

“I want to experience this moment in peace.

“This is my third baby.”

The controversial socialite made headlines two years ago after her infamous shower dance on Stunner’s Instagram Live programme.

She then turned it into a show called Tinogeza Tuesday.